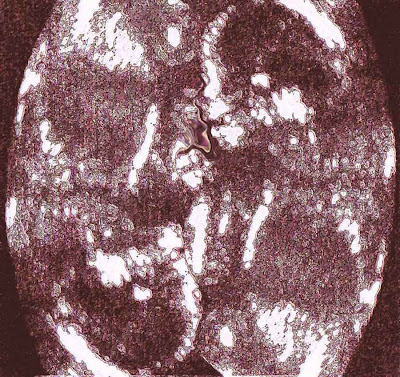 I suppose it shouldn't come as such a shock, given that twins run in our family, but my sister is in a state of utter shock.

After emailing me the latest ultrasound, Candace called and wailed into the phone. "I'm going to have five kids--can you imagine?"

Candace and Bill had planned to stop at four, but, apparently, the elusive Junnifer had other ideas. Junni, the little devil, must have been hiding behind Jennifur in the original ultrasound. Evidently, such surprises are not all that uncommon.

"You'll be okay," I said. "The girls will entertain each other. Remember how it was when we were growing up?"

"That's not the point. Think of the clothes! Diapers! Food!" A weepy, sobby pause. "College!"

She has a point; I don't know what I'd do with five kids. Probably go crazy.

But Candace has the patience of Job, unlike me who unravels at the slightest provocation.

In every sense of the word, we are mirror-image twins; we may look alike, but we have very different personalities. Candace loves her big noisy house and frequent entertaining, while I prefer my cozy home and quiet times with Jerry and the kids. I'm just not into the big party scene, not even during college.

Still, I love my sister; we're extremely close, and despite our different personalities, we understand each other and enjoy being together.

The girls are due next month, but Candace's doctor will be inducing labor two weeks from today. The girls are getting rather large, and if they wait too long, they might have a difficult time getting through the birth canal (I'm still trying to figure out how Junni managed to hide for so long).

I have arranged to take off work for two weeks; I fly out next week. I will be in that delivery room, just as Candace has always been there for me and my family.

Junni and Jenny: I like the sound of that...

OMG! Candace and Bill will need two of everything!

I'd better get that credit card out! 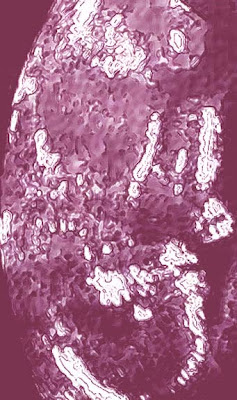 Posted by Jennifer at 5:41 PM No comments: 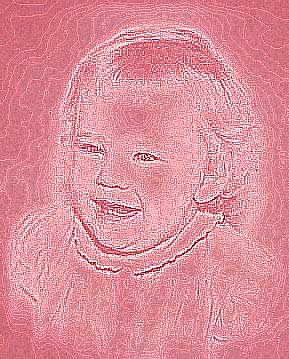 UPDATE: After my sister Candy had her first ultrasound, we thought she was going to have a singleton, but it turns out that twin Junnifer was hiding out, probably somewhere behind her sister Jennifur, so I'm reposting that original post here, on Junnifer's page.

I'm not sure how to begin, so I'll just spit it out.

My twin sister Candace and her husband Bill have totally lost their minds.

Let me just back track for a bit.

When we were growing up, we promised (crossed-our-hearts-and-hope-to-die kind of thing) we would each name our first born girls after each other.

Okay, so then I had my first girl, named her Candace, Candy for short. My sister was delighted, and Jerry, my husband, didn't care one way or another.

Now I got to admit; Candace is probably my least favorite name, and Candy's a bit smarmy, but a promise is a promise, and doubly so when the promise has been made to a twin who also happens to be identical.

Still, Candy, now five, doesn't seem to mind her name, though when she hits her teens, she may decide to assume her Candace persona or go with her middle name Erika. For now, she likes the story about how her Aunt Candace has given away her name and how I'll give my name to her future cousin.

My philosophy: if you give a kid a strange name, always offer an "out"--saves you a lot of grief down the road.

Our hippie parents nearly named me "Ariana Infinity" and my sister "Infinity Ariana," but our grandmother came to the rescue and pounded some sense into their Patchouli heads. Whew! Missed a big-time bullet there.

"We're trying one more time for a girl, but if it's a boy, that's it," Candace emailed me about five months ago. "Time to wind down the old biological clock; we'll just have to settle for four boys, and I'll love 'em all just the same."

I was disappointed, of course, but I certainly could understand why Candace would want to hang up the old fiddle and bow, at least for curtailing the flow of children. Jerry and I were lucky and have a boy and a girl; I probably would have stopped at two anyway. I'm not as maternal as my twin--she inherited more of that gene than I did.

I didn't know whether to jump up and down for joy or feel a sickening dread at the probability of yet another nephew. Don't get me wrong; I adore my nephews, but I wanted to get what was due me: a niece named "Jennifer," nickname "Jenny" or "Jen." So I decided to refrain from celebrating until after Candace's ultrasound.

Now to the present:

Today I get this long-awaited email from Candace, along with the ultrasound (that's not a penis, by the way--just a "bud" that all fetuses have at this stage of development): 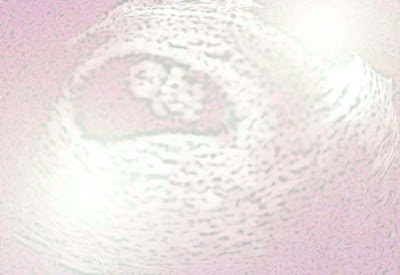 But then I reread the entire email:

We're absolutely thrilled as I know you are too!

Oh, I so want you and Jerry and the kids to be here when Jenny arrives (but only you and Bill can be in the delivery room, please).

Just one little thing I need to discuss with you.

Bill and I agree that Jenny will bear your name--that is a rock-solid promise that I made to you when we were growing up. And Bill has known from the start that our baby girl would be called "Jenny." It was practically etched into our marriage license.

Here's the thing, though.

As you know, geeky Bill insisted that we register first/last name dot-com domains for all our boys. Given that we have a fairly unusual last name, it was not a problem for the boys. We simply registered two domain names for each child: one with their middle initials and one without.

But with Jenny, we got to thinking about how her last name might change after she gets married, making her first/last name domain practically irrelevant. Now before you go all feminist on me, I just want to remind you that neither of us kept our maiden names, so I have no reason to believe that Jenny will either.

If she does, no foul.

I suggested to Bill that we simply register Jennifer.com for Jenny--that way it wouldn't matter if Jenny changed her name or not.

Bill just laughed. "That train left the station years ago," he said. "You're looking at a $xx,xxx (maybe more) domain name."

Jennifer, I was shocked; I knew Bill was involved with domain names somehow, but I never realized how lucrative it could be. Even so, no way could we afford to pay that kind of money for eight letters plus a dot-com.

I asked, "What about dot-net or dot-org?"

"Gone and gone. The other major TLD's are history as well."

A TLD, Bill explained, is a Top Level Domain (dot-com, dot-net, dot-org, dot-biz, dot-info, dot-us, dot-tv, dot-mobi) and there are hundreds of them, but most of them would be unrecognizable to the average web user. "Really," he said, "The kids will need the dot-com version of their names; otherwise, they'll slide into a cyber vortex."

Whatever. I still don't get all this domain stuff, but Bill's the expert...

So we looked at different ways of spelling Jennifer, all of them gone as well.

Why did grandma talk Mom and Pop into naming you Jennifer? Maybe you would have been better off being named "Ariana Infinity"--that way we might have had a prayer...

Bill went over to some web site called Domain Tools and ran "Jennifer" through something called a "Typo-generator" but with little luck. Gone, gone, and gone.

I wanted to keep the spelling as close as possible to "Jennifer."

He said, "Well, good luck with that one."

"Maybe you could offer to buy Jenifer.com, Jeniffer.com, or Jenniffer.com from their current owners," I said.

"Those domains would be out of reach too; I'm trying to build my business, not break it." Bill paused and sighed. "Maybe "Jennifer" isn't such a good name after all. I'm sure Jennifer would understand..."

"She would never forgive me..."

I asked Bill how to register for a domain, that I would keep trying until I hit on a good compromise.

He showed how it's done, and I got to work:

(I even tried some names twice, just in case their owners changed their minds in the interim and decided to give a poor family a crack at a decent Jennifer dot-com name.)

How can anyone STAND this ridiculous domain business?

Did I just see AVAILABLE?

"Oh, get your mind out of the gutter and over yourself." I scrunched the receipt to my heart. "The pronunciation is the same, and it's only one letter off. That's what counts."

Though I must admit that he had a point. That "fur" business might prove to be a bit problematic once Jenny hits middle school. I might have preferred something like Jennifir.com, but then again, if she's tall (like Bill), they might call her JenniTree.com.

Well, whether Bill likes it or not, it's settled. We will spell Jenny's name as Jennifur and allow the future to fall where it may. Besides, it will be up to Jennifur herself to make or break her name.

It's a compromise, Jen-Jen, a way to keep my promise made to you and yet lead our baby girl (gurl?) into the cyber future.

I'm not sure what to say: Jenn-i-fur?

I just hope Can-Can and Bill choose a sensible middle name, like Lee or Lynn--you know, an "out." Just in case...

Look, I have lived my entire life without owning a domain name, and my daughter and husband don't own one either...

I break into a sweat and crank up my computer...

Is it too late to change Candy's birth certificate?
Posted by Jennifer at 10:31 AM No comments:

In The Beginning, Junnifer was Hiding Out...

NEW YORK - Besides leaving the hospital with a birth certificate and a clean bill of health, baby Mila Belle Howells got something she won't likely use herself for several years: her very own Internet domain name.

The rest of the story...

Even as a startup domainer, I was amazed by the possibility that prospective parents would rule out baby names that were unavailable as dot-com domains, so I decided to write a fictional story about "Jennifur, the Internet Baby," a mythical fetus/baby with a created/variant name based on URL availability. I found and registered Jennifur.com on February 9, 2008, the same day this blog was created.

Although I do own other dot-com variants of Jennifer, I felt that Jennifur would offer some interesting story conflict.

As someone who has been hankering for the dot-anything of Jennifer (I do own Jennifer.tc), I understand Bill and Candace's frustration at not being able to get their daughter's first name as a dot-com domain.

I plan to follow Jennifur's fictional life, up to the turbulent teens, although not exactly in real time. It is, after all, the internet, where trends and fads have the cyber life of gnat.

Our heroines will have to make their own way through the cyber world, despite their variant names.

This is a work in progress; revisions will be done offline.

To read the chapters in order, use the table of contents below.

The Author's Other Links